Once upon a time
She worn bright pink lipstick,too
A dark brown bikini
Chosen because it matched
Her dark brown skin
So exactly
That from a distance
It looked as if she was
Dancing naked on the dock
Drinking Bartles and James
cheap wine coolers
And now..she wishes
She had the bikini,the tan
And the time to dance
On the dock

But all she has right now

That hasn’t been dark

In far too long

And she hasn’t danced

On a lake dock

Or worn a dark brown bikini

In far too long

Do it all again

When she gets a chance

(This was inspired by another writer’s blog post…I could so relate and the words came.)

Now that I know

it’s all I can do

not to take everything

down off the walls

stack them one by one

take all the paintings

the pictures and the words

tie the string on tight

sit in the rocking chair

on my patio I love

blow kisses to the air

that dare to blur my sight

I’ve got my walking papers

and I don’t belong

and I sure don’t go

where I’m not wanted

Just waiting for the door

Pulled my boots on

when I heard the words

and these boots were made

but I’m taking all my things

or tied with string

because they are carved

into the walls of my heart.

safe beneath these sheets

and your soul craves

to invite someone else

come just as you are

come and be touched

💜As a massage therapist, I believe so strongly in the need for touch. I believe that if people received weekly therapeutic touch sessions, the world would be such a kinder place.

Jesus modeled touch with compassion in such simple,beautiful, profound ways…No-one was “untouchable” or unreachable.

My Mema was the same way ….one of the best lessons she taught me was the simplest..the importance of touch.

There waa a homeless man that lived in the woods close to our home. Mema would often bring him meals from our home or, when she saw him out on cold mornings, she would get a cup of coffee and biscuits stuffed with sausage from the fast food restaurant on the corner….but the really important thing she did was more fulfilling than the food and drink.

Mema would hand him the food and hold his hands for a few minutes and meet his eyes. She would smile and talk to him as if he was a long lost friend.

She told me, “Jeanna’,look at his beautiful brown eyes…I imagine his momma just loved those brown eyes so much.”

Someone asked her once if she was afraid of getting germs from touching. “that dirty old homeless man” and, to this day, I remember her voice filled with anger as she replied, “I can always wash my hands and get the that kind of dirt off….but you can’t wash off an ugly heart!”

That just about says it all….

Touch someone today…and let yourself be touched, 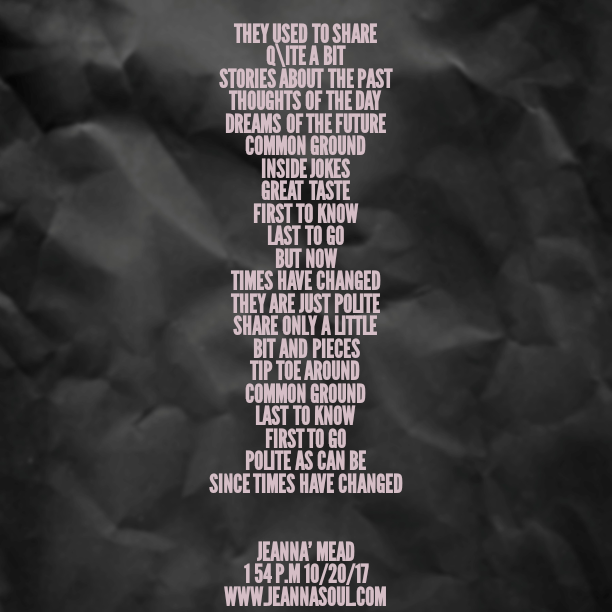 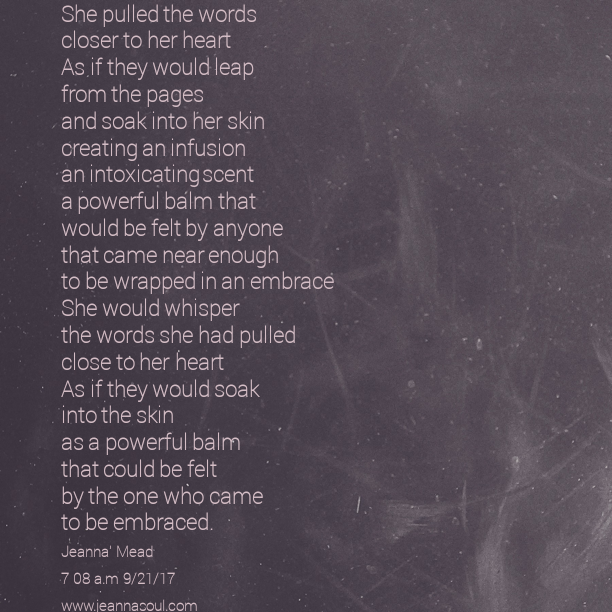 Led onto the dance floor

Towards the light and the end of the line

Up the hill, out of the way

Into bed and onto a stage

For a fool by those that didn’t know any better

For weak instead of strong

On many a wild goose chase

By mistake for someone else, a different nationality

To breakfast, lunch and dinner

Out for wine and coffee

And to a picnic in a park

To the very end of her rope

Right  down to her knees

And she’s been taken to the heights of absolute ecstasy

advantage of far more than she’ll care to admit

the wrong way by those that don’t understand

But most of all, she gets taken for granted

It seems to me

That my desires change

From day to day

Outside on the patio

Other times I can’t wait

To feel the music

And dance all night

The pleasure of company

Loved ones with me
On cold days,I so desire

But as soon as it warms up

Coconut oil rubbed on my skin

Feet plopped in the sand

There are times when i desire

Nothing but an embrace

And other times I can never get enough

Of my love language of touch

A wisp in the air

Another times I make sure

My desires were made clear

For quite some time, I’ve thought about the conspiracy of love, the relationships we form with people that sometimes,often times,make sense only to us.
I have,over the years,gotten to know and to care deeply for people that have scars on their bodies, which can be seen and felt,just like my own scars but, the real wounds,the real scars are the ones carved on the soul,hidden from all but the most trusted few.

Sometimes, though,those scars become chains,snares,gilded circles of barbed wire wrapped tightly because of a decision to hold on to the pain, to yield the  rope of unforgiveness, to create such a web that tangles everyone that even comes close.

There’s something tragic about seeing people afraid to step outside the confines,to dance with someone,to enjoy company;a cup of coffee, an long conversation because they have been unforgiven, and sometimes, it’s that they haven’t forgiven themselves but far,far more often,it’s because love hasn’t.

And it is a crying shame.

“Little did I know that in one year these words would mean even more and the reality of my words would demand my response,”

Now, on February 17 of 2017, I realize just how much I’ve learned about love,about forgiveness,about relationships and just how beautiful choosing to live with an open,giving scarred and healed heart is.
God has created in me a capacity to love and forgive-myself and others-far beyond what imagined and I am fulfilled with wonder.

Feel with both hands, Jeanna’