half awake and half asleep

pushing thru the haze

She stared at the row

looking for the weakest link

to run to and break free

much to the surprise

of those that doubted

They only saw her size

of who she was

the label that they used
to try to describe

the girl they called

to break the line

She heard them call

“Come over, Come over”

Spurred on by the doubts and the taunts

She ran as if her life depended on it

Broke the chains and the expectations

and suddenly she was in

standing in a row

lined up with the very same ones

spurred her on with doubts and taunts

She clasped the outstretched hands

dug her heels in

willed herself to have

never let them break through

even if they knock her down

with doubts and taunts

she’ll surprise them all

that thought they knew

of the girl they used a label

broke through the chains

surprising herself and others

exactly what are the weakest links

and who is strong enough

to hold her hand

break free and be there

“Come over, Come Over”

👣💗 Inspired by Paulo Coelho: “It is easy to be a hater. Go for the difficult task: be a lover.”

But years ago, she wrote

a simple prayer in a poem

” Let my heart be broken

bring me to my knees

Let my heart be open”

And now she sees

that she wouldn’t do it

when it’ll be easier to turn away

as if she’ll be treated the same

the doors and the invitation

although it’s been closed on her

to let her heart be broken

than to regret the chance

though others hold back

But she can’t be any different

since she had asked.after all.

to let her heart be broken 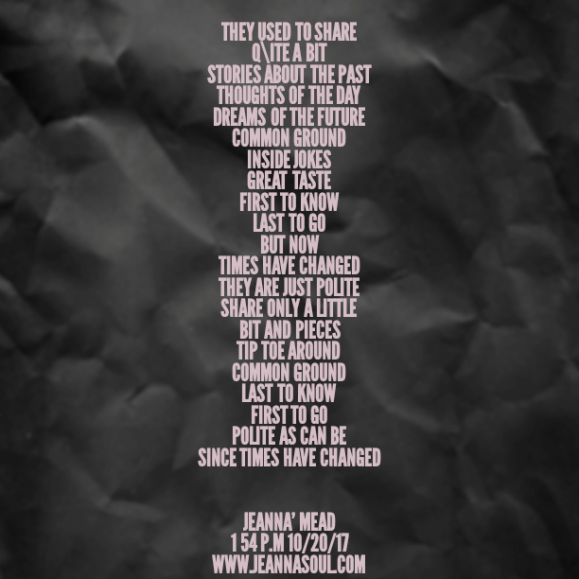 As September collapses into October each and every year, I find myself at that familiar ragged edge once again.

This is the month I began saying “goodbye” to the woman that raised me, loved me,claimed me and shaped me.  It’s a month full of “last” and of too many “first” and I dance along the edges between the need for solitude,the desire for company. It’s a time when I long to be asked to dance and when I want to dance all by myself.

My Mema, Lord, have mercy, was the most charming, creative, headstrong, fearless, loving woman that ever danced this earth.

And I say “dance” instead of “walked” because that’s exactly hl what she did.

Our garage door was left wide open and Marty Robbins, Tammy Wynette, George Jones, Dolly Parton would keep us company while we worked in the garden, planting onions, beans,tomatoes and peppers or just sitting out in the driveway talking.

At any moment, she might catch my eye, wipe the dirt off her hands and grab my hand while saying , “Come on, let’s dance.”  We would do a little two stepping in the grass and she would be singing the words so I could read her lips.

Her blue eyes would twinkle and she would say, ” Oh, I just love this man’s voice….he could put his boots under my bed anyday”

That was just a figure of speech for her. Truth be told, the only man who ever left his boots under her bed was the man she loved till the day she died.

Daddy and Mema could cut a rug better than Fred and Ginger. I remember being star struck watching them on the dance floor when I was 5 years old. Mema in a long, flowing chiffon gown and Daddy in his trademark black suit were the only couple on the floor and they swirled and turned and moved as if they were one and the ballroom was a stage.

As the song ended, people burst into applause and Daddy took Mema back to her seat, and smiled at me.  I felt as if I was the luckiest little girl in the world- I was the daughter of people that could dance like that!

Mema used to tell me stories about how her momma- a stricter God-fearing woman- didn’t approve of dancing so Mema and her sister would sneak off into town and watch the couples dancing then come home and practice in front of the mirror with each other until they got the moves down pat.

That disapproval didn’t make much difference to her and maybe that’s what fueled her passion so much. There was this strong streak inside her that just didn’t “give a hoot” what anyone else thought.

There were times when I was a teenager trying to fit in and be “normal” when Mema grabbing my hand and dancing in the aisle of Minyards just embarrassed me to pieces.  I would pull back and whisper, “Mema, people are WATCHING!” and, those eyes would twinkle again and she would laugh and say, “Well, then come on, Jeanna’, let’s give them something to watch!”

“Something to watch” was exactly what she was. She could shake and shimmy, turn and twirl, keeping perfect rhythm to the beat all the while carrying on the exact emotional gestures that best suited the song.

This was true no matter what she was wearing or where she was,  and our home was her favorite dance hall.

There were 3 switches on the light plate by the front door of the house we lived in. The first switch was the porch light,the second turned on the foyer light but the third switch was magic.

When that third switch was lifted up. down would come one of the many LP’s stacked high on the stereo and, by the time, you’ve taken a few steps. the rich voice of Freddy Fender,Nat King Cole, Kenny Rogers, Ray Price or Barbara Mandrell would fill the house, loud and clear.

Sometime it would be gospel, or Big Band or holiday music but most of the time, it was country-western.

And there she would be, barefoot and in a gown, standing in the kitchen, putting a pot of stew on for dinner while frying bacon for breakfast as the biscuits baked and she’ll be singing along -because she knew all the words by heart-tapping her spatula and dancing as she went as if it was the most natural thing in the world.

Maybe that’s why it’s only natural for me to find myself dancing up to meet a client, or twirling around during a session unbeknownst to the person laying facedown on my table.

.Maybe that’s one reason that I don’t feel like I truly know someone until I’ve danced with them.

Maybe that’s why I dance in the aisles with my little Riven and watch her shake and shimmy as her eyes twinkle with that same mischievous delight.

Maybe that’s why October is the most bittersweet months of all and why I find myself hiding away, seeking some peace and quiet so that I can hear my Mema’s words again.

“Come on and dance.”

Maybe that’s what life is all about….not giving a hoot about what anyone else thinks, letting others watch as you do whatever you love to do and. saying ‘I love this’ every chance you get.
After all, someday you will be way up yonder in glory and Mema just might grab you by the hand,with a twinkle in her eyes and say, “I just love this song..come on….let’s dance!”

For you, my beloved Mema..

i love you with both hands and I’ll dance…..every single chance I get. 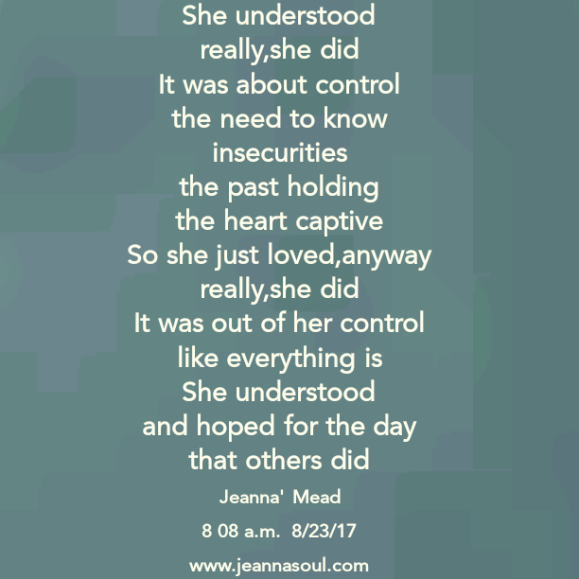